How often did you get an idea to create something of your own, interesting and new, something that you have never done before in your life? You turned on the heat, began to look into how to implement it, but finally burned out at the stages:

Sounds familiar, isn't it? On our Earth, there are more unfinished paintings, unfinished pools, unfinished birdhouses than amateur masterpieces of art, happy children in pools and well-fed birds.

In 90% of cases, all incomplete business was associated with incorrect planning or with a lack of awareness of the whole picture. You simply did not recognize and were not prepared for the difficulties that you faced. You only knew your next step, but did not know how much you still have to go. Having realized that, there was no motivation for further movement.

Who'd have thought that more than one brush would be needed to paint a picture, that there could be stones under the ground, and a hole for birds should be cut before you hang the birdhouse on a tree. You saw the hill, reached it, and only then saw the next one. Demotivating, isn't it?

Why Did I Write this Article?

I have been thinking about writing an article for a long time, however, I kept putting it off. Having been in development for 5+ years, I would like to share my experience. During the first two years of developing mobile applications, I understood that if I had come across such a road map on React Native before starting the study, then I likely would not have become a mobile application developer at all. Or, at least, I would know the scope of work and not give up in front of the next hill.

It’s important to understand that if you are going to do something more complicated than a calculator, then regardless of what tools you choose to develop the frontend of your application and whether you are going to store user data, synchronize accounts on different devices or do business logic, you will need a backend. The options for the backend are described in the article below. Therefore, if you thought that you would not have to bother with it, then it’s better to find out about it right away.

Who will benefit from this article?

What’s in this article:

You will not find in this article:

Here is boring information about the market share of mobile applications among all applications, the growth of their number every year, the listing of super-large and cool companies that have mobile-only apps.

As you can see from these statistics, you are absolutely right in your choice!

1. Choice of Language and Framework

Having decided on the direction, you need to choose the platform/platforms for which you are going to write. The choice of language/framework will depend on this.

Briefly about the main options:

NATIVE (supported by a specific OS):

1. Android – according to Statcounter, more than 70% of wearable devices are running on Android.

2. iOS – if you focus only on iPhones and iPads. 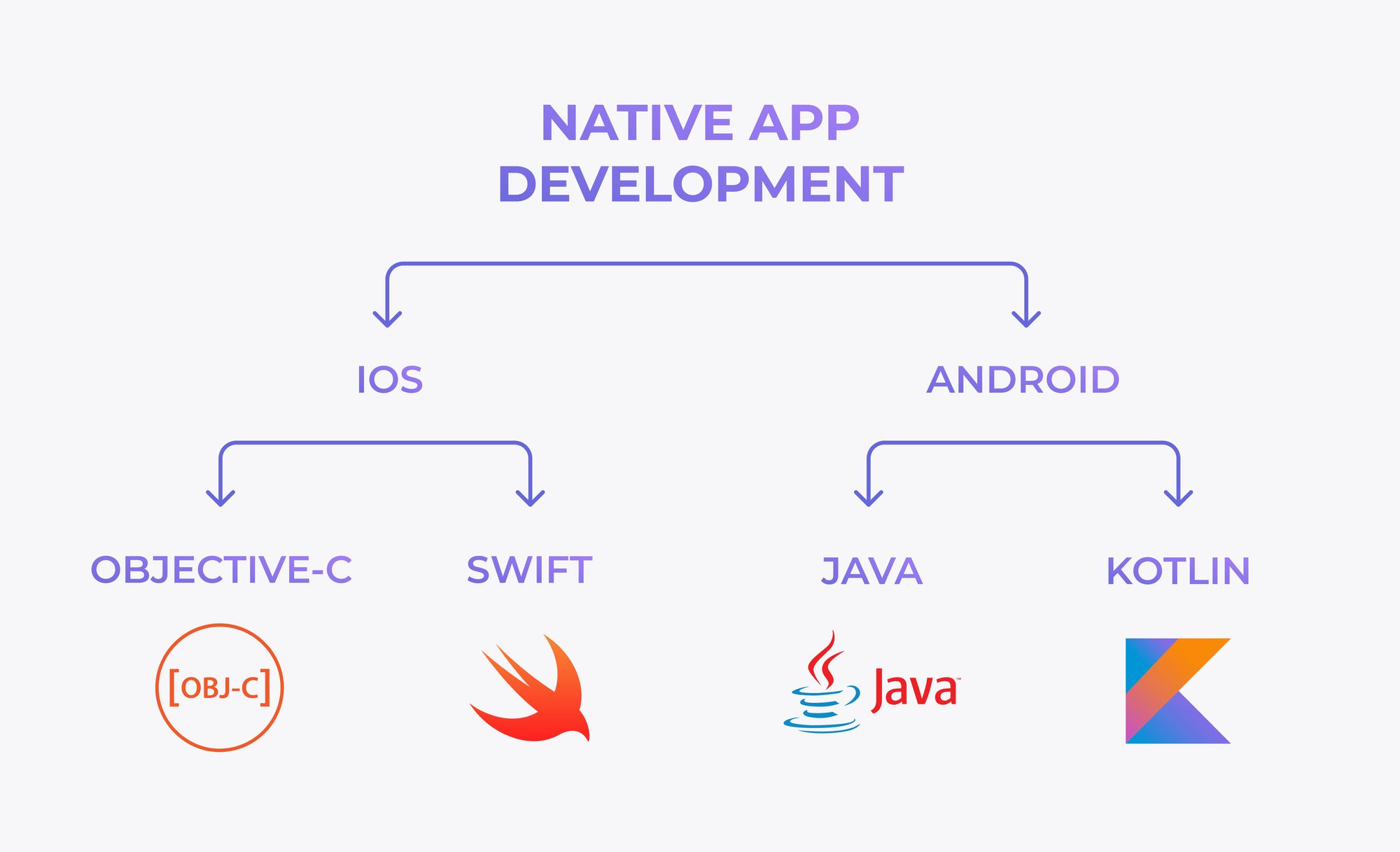 HYBRID (both Android and iOS): 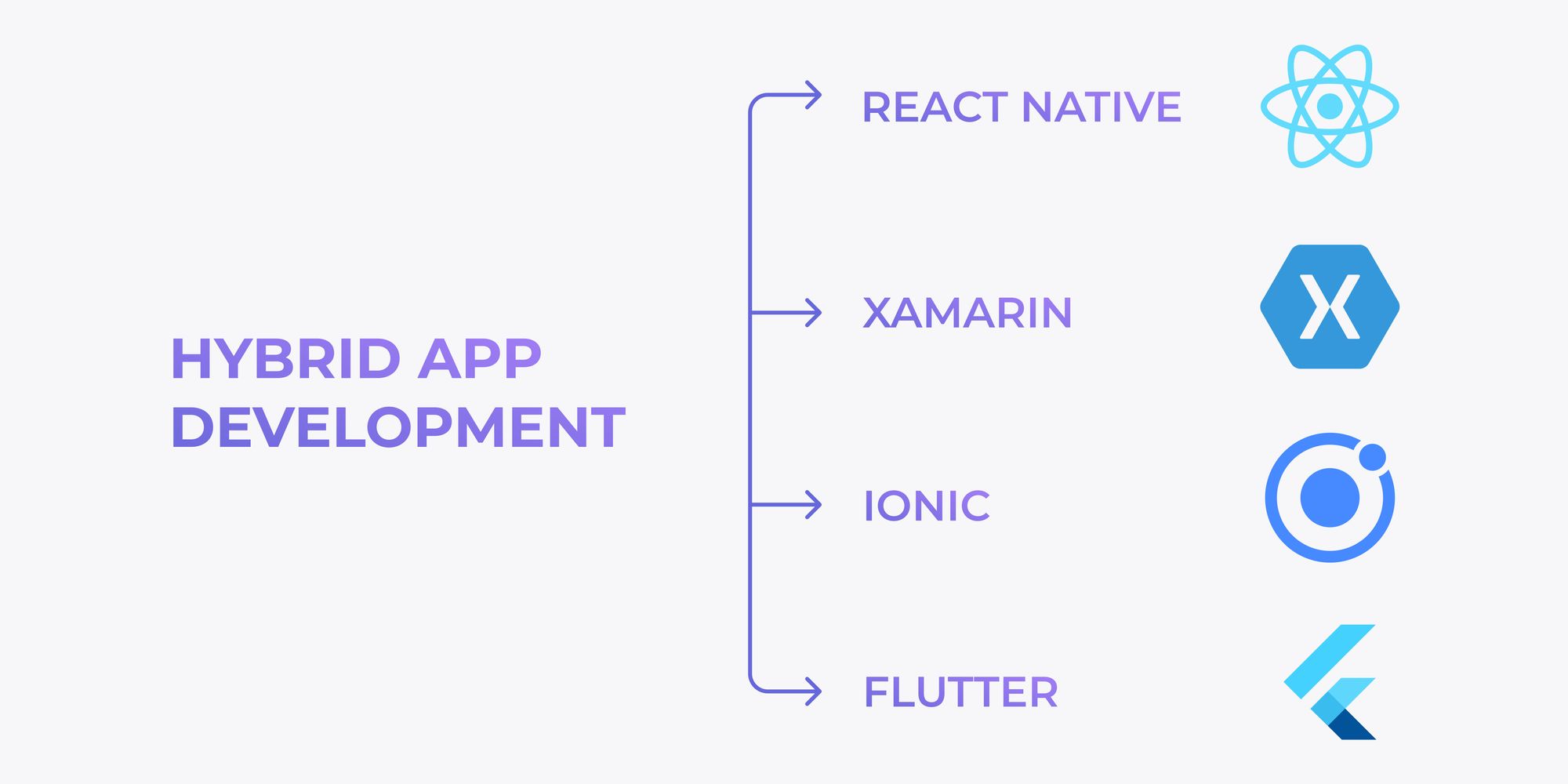 There is a huge number of articles and tables with the pros and cons of each language/framework, and every inexperienced developer gets into difficulties when choosing. I offer you my simple "chain" that will lead you to the right choice using the exception method. First of all, let's see what can be excluded at once: 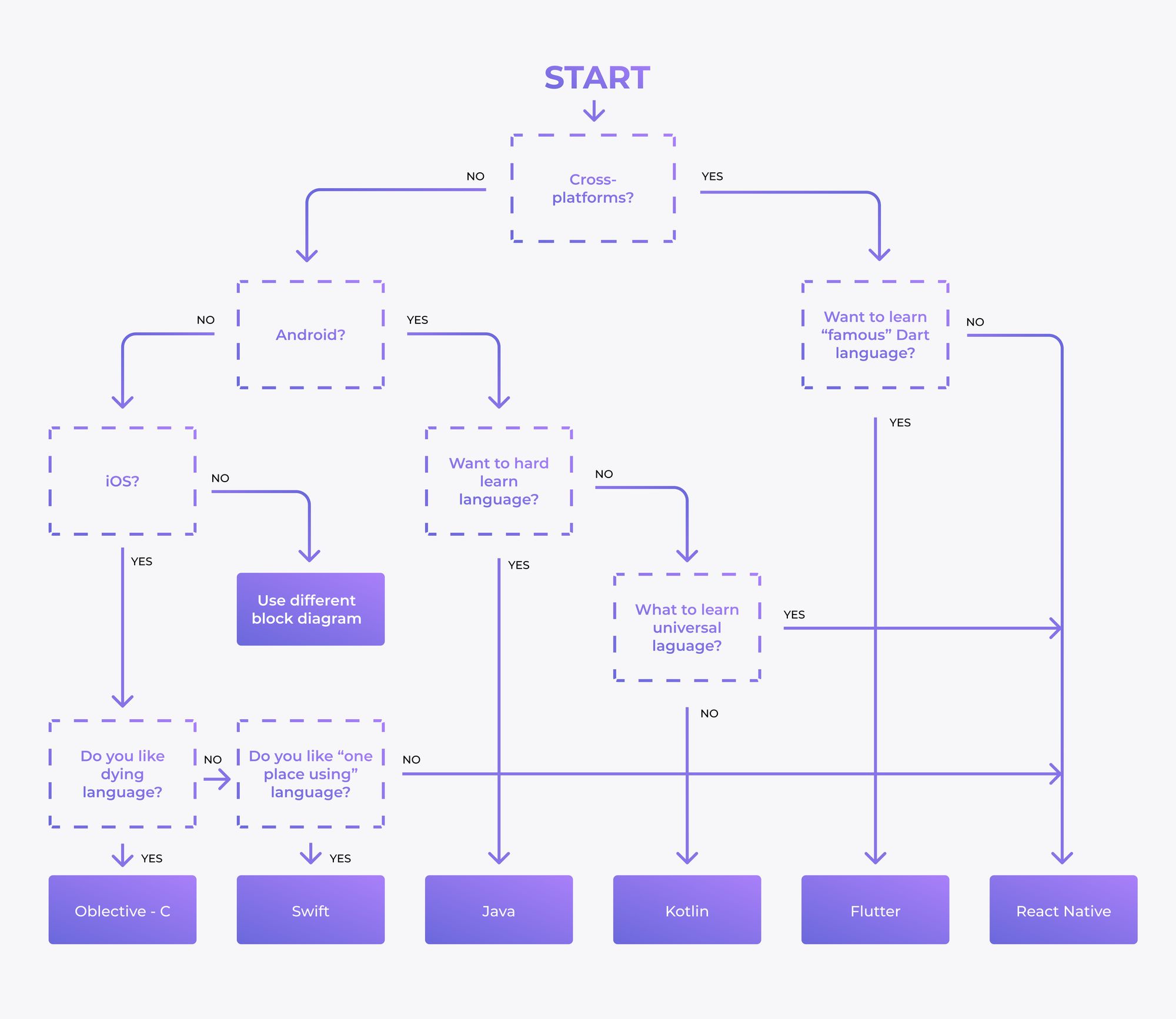 If there is a need to share your code with the web version, then React Native allows easily transferring your code written in Javascript to the browser, unlike other languages and frameworks.

For sure, performance is better when writing in Swift and Kotlin, but is it worth spending time on learning two languages to write one simple functionality? And what about the famous DRY principle? After all, we will write the same thing, but in different languages. This is more a joke than a truth. Or not?

The choice is yours, it's up to you, and I will not push you to anything. But still, I'll quote one famous person:

It doesn't matter what you choose to develop a mobile application, the main thing is that React Native” © Jason Statham

So, you've chosen React Native. I tell you what, it is an excellent choice. However, I have to say that if you do not know JavaScript and React Native, then you should understand at least the basics. Start with JavaScript, learn from books, courses, youtube videos – to your liking. Just choose the up-to-date materials, do not learn according to the 2008 manuals. It's the same with React Native. If you have the time and desire to master web development at once, you can start learning ReactJS after JavaScript, and then React Native. The ReactJS library is very similar to React Native, so after mastering it, you will need to figure out the differences between React Native. And now you can write both for web and mobile.

In order not to move away from the main goal, spend no more than a month on this. Then you may return to the basics during development. And, of course, you shouldn't take a 3-year course if you just wanted to write your own application.

I would definitely recommend using TypeScript in your project. Typescript is a Javascript add-on used for static type definitions in development. You will ask: "Why do I need typing in my application if I can save time and do without it?"

Let me give you an analogy:

Everything goes well as long as friends put oranges in the box. Then someone decides to put half an orange there, someone puts kiwi, and someone puts stones. You pack, send, but the grandmother can't understand why the juicer stopped working. And now you start checking presents and letting in only those friends who brought the orange. This is TypeScript.

So, it's up to you – to hope for the honesty of friends or become a little more vigilant.

The next step is to make sure you know what is needed to develop and deploy your app. And I'm not talking about system requirements or your IDE for development:

Expo is a framework with a set of tools and services for React Native. For beginners, I would recommend using Expo for several reasons:

Still, it should be understood that Expo is an option for the first steps. If you expand your application, then in the near future you will face the fact that Expo will not support what you want to integrate. And you have to get rid of Expo in the project, which can be very difficult.

Regardless of what your application is for, it should look good and it shouldn't take long. Choose a tool for creating UI. Most popular options:

It will not be difficult to figure out how to work with these libraries, so your application will quickly be filled with buttons, icons, tabs, etc.

If necessary, you can find ready-made libraries for animations, chats, maps, etc.

I assume that you will have more than one screen in the application. It would be great. Here is one option – React Navigation. Switching from one screen to another and back should be quick enough. As required, look in the official documentation and add into your application. It will be a little more complicated than with UI components, but there are many tutorials, so in the end you will figure it out.

You will definitely need to request, receive and display data in the application. In the official documentation, React Native offers basic Fetch API and axios options. In most cases, at the entry level, this will be enough for you. You will be able to receive data asynchronously, modify it, and catch errors.

In the future, I recommend taking a closer look at GraphQL and a client for it, for example, Apollo Client. GraphQL is a query language for recieving only the required data (graphql should then be used on the backend too). Apollo Client will probably allow you not to use Redux, MobX, Redux-Saga, RxJS, etc. But, until you reach the high of REST API capabilities, do not rush to use everything and anything.

When (if) you realize that you lack the use of the received data in the place where you receive it and you need to use this data in several places, and forwarding data through props from parent to child elements is already like moving in a metropolis at rush hour – it's time to think about data storage.

And there are two main approaches. I would call them the first and second:

First (classic). You start using Redux or MobX. You create a store where you keep the data received from the server, write actions, reducers, selectors, then start using Redux-Saga, RxJS with Observable for asynchronous requests and try to synchronize your local store with remote all the time. It even sounds confusing, doesn't it? But still, in most cases, this is the main option in React/React Native projects.

Second (alternative). As I wrote above, if you see that the application is expanding, there is more and more data, and if the backend allows you to use graphql, use it. Basic Apollo Client settings do not require deep client research. Later you may have to dig into the documentation (for example, how to work with the cache), but in the meantime it will be enough to read how graphql works, look at how to connect Apollo, how to create query and mutation.

If you need to create a login, registration form, etc. – you definitely shouldn't try to add custom inputs and submit buttons. Use ready-made solutions. Formik and React Hook Form are the main options. I would recommend the second option, just because the code looks cleaner, plus these are hooks (we are progressive guys).

These five points are enough for you to complete 90% of your initial tasks. For everything else, either go to the React Native Directory, or write custom elements for your tasks.

Let's summarize the training plan for creating your mobile application:

It may seem that it is too much and you would like everything to work in a week. But you don't hope to learn to drive or to cook in a week, do you?

Now you see the whole picture and you can decide whether you are ready for an exciting journey called mobile development!

To leave a lasting impression on a customer you need a stunning UX. But how can you improve the UX of your website or mobile app? We present you with a checklist along with other useful tips. 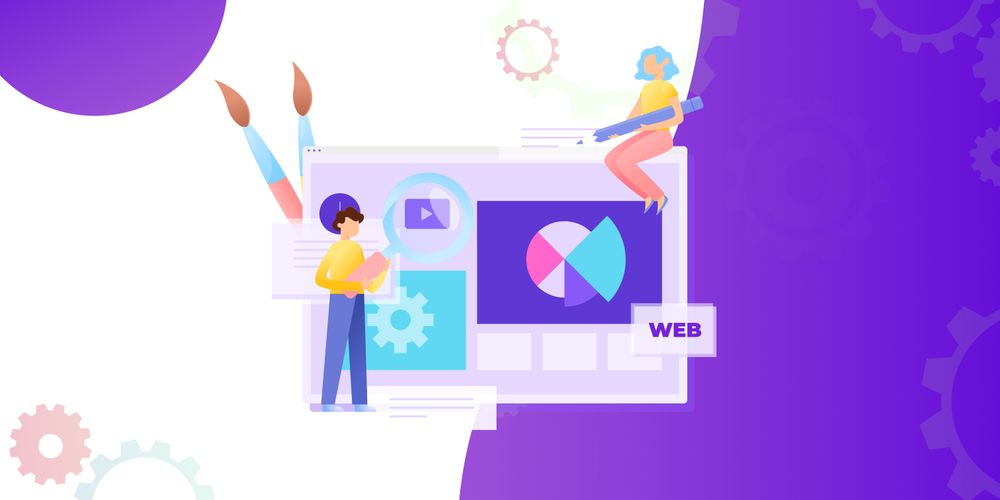 The first impression of the company depends on its website as it fully represents the business. If your website is poorly designed, it may affect every aspect of your online success. Let's take a closer look at the signs when your website needs a redesign.