Recently we’ve written 15 Surprising stats about Angular to explain why Angular is so popular. Based on this article one may think that Angular is suitable for all projects. But, while choosing the tech stack for your project, you should take into account the reasons when Angular may not be the best option for you.

2muchcoffee is the Angular-enthusiast dev team. We developed 20+ innovative web products with this framework for SMB, SME, and large enterprises. Specializing in Angular for web development, we maintained an open-source package - Ngx-restangular. The project aims to simplify common GET, POST, PUT, DELETE, and other requests with a minimum of client code.

Based on the 5+ years of experience in software development, we got to know every ins and outs of using Angular and ready to discuss whether is Angular good for your project. Buckle up and let’s begin!

Why You Shouldn’t Use Angular?

Don’t get us wrong, Angular is a great choice to build a scalable and reliable application. But as a product owner with or without a tech background, you need to understand that it’s not rational to use Angular for every product.

Here are the top 8 reasons signaling that Angular is not the best choice for you.

If your project takes a few weeks to complete, don’t bother to use such a powerful tool as Angular. The short-term projects (up to a month) or startups with limited budgets and resources would not benefit from Angular. Plus, the technology is difficult to manage with a team of few developers, since the front-end framework’s complexity may be hard to overcome.

If your goal is to reach the top search results Angular won’t help you much with it. Angular is a relatively SEO-friendly technology. You should make additional effort to optimize your website for search engines. So, be ready to think through marketing and SEO strategies.

Angular is a bad choice for small web pages with static content. “What is Angular used for, then?” you will ask. Angular is the right for apps with dynamic content. Otherwise, the overall size of the project will increase which will increase the load time as well. This will only add complexity to the project. That is why Angular is not recommended for landing pages.

Angular is difficult to learn, which can be a tricky task for newbies devs. And even though the component-based architecture makes code more readable, it’s still difficult to manage and set dependencies between components. So, the component-based structure is easy to comprehend only if you have prior experience. TypeScript only adds fuel to the fire since you need additional time to learn it.

Surely the cost for development depends on various factors, like the scope of work, product features, dev’s experience, and whether you hire outsource or in-house teams. But since Angular is quite a complex framework that is difficult to learn, the dev’s rate will be quite high.

In terms of migration, it’s easy to migrate data from Angular’s fifth version to the fourth one. However, it would be much difficult to switch from AngularJS to Angular.

7. Prefer Freelancers Instead of Agencies

If you prefer to work with Freelancers, then Angular might be not for you. The thing is, it might be hard to find experienced Angular freelance devs. Due to the fact, Angular is not an easy technology to learn therefore freelance devs specializing in Angular development with hight quality expertise are rare to find on the IT market.

8. You Already Have a Good Team in Other Tech

Don’t blindly follow the trends and tech stack of big brands. It’s probably tempting to use Angular just because YouTubeTV or Udacity used it - and looked at those platforms: great interfaces and complex scope of features. But in reality, if you already have a great team that experienced in other tech stacks (e.g. React or Vue) just stick to them.

As it goes from the mentioned points: Angular is an awesome tool but not for all projects. You need carefully consider all the reasons why Angular will be bad for your application.

So, When Use Angular?

However, if none of the criteria above are true to your project and you’ve researched all Angular pros and cons (FYI there are more pros than cons) then congratulations on the right choice and welcome on board Angular technology!

Let’s discuss when choosing Angular for your web app development is the right decision (from the product owner’s perspective). 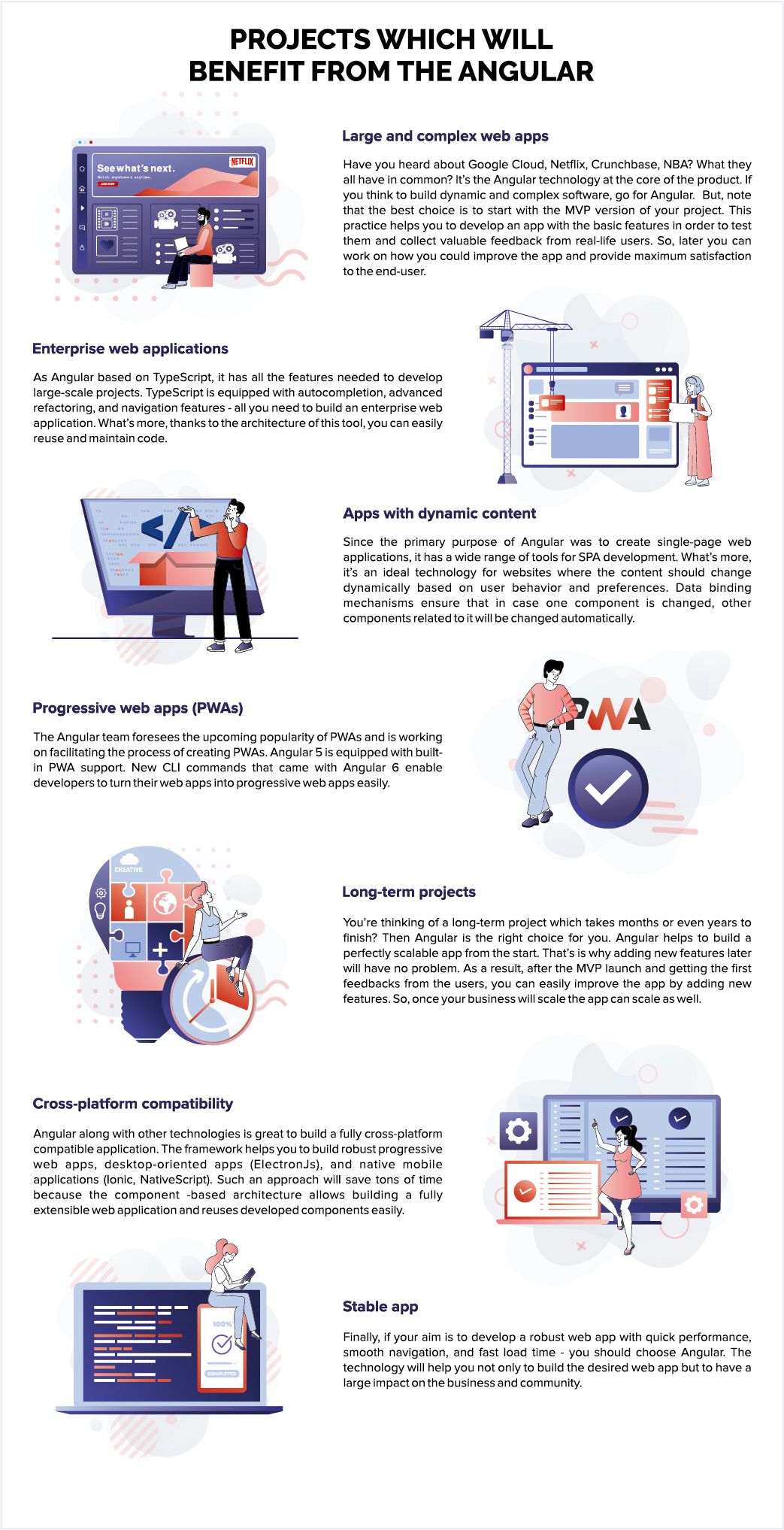 Have you heard about Google Cloud, Netflix, Crunchbase, NBA? What they all have in common? It’s the Angular technology at the core of the product. If you think to build dynamic and complex software, go for Angular.

But, note that the best choice is to start with the MVP version of your project. This practice helps you to develop an app with the basic features in order to test them and collect valuable feedback from real-life users. So, later you can work on how you could improve the app and provide maximum satisfaction to the end-user.

As Angular based on TypeScript, it has all the features needed to develop large-scale projects. TypeScript is equipped with autocompletion, advanced refactoring, and navigation features - all you need to build an enterprise web application. What’s more, thanks to the architecture of this tool, you can easily reuse and maintain code.

Since the primary purpose of Angular was to create single-page web applications, it has a wide range of tools for SPA development. What’s more, it’s an ideal technology for websites where the content should change dynamically based on user behavior and preferences. Data binding mechanisms ensure that in case one component is changed, other components related to it will be changed automatically.

The Angular team foresees the upcoming popularity of PWAs and is working on facilitating the process of creating PWAs. Angular 5 is equipped with built-in PWA support. New CLI commands that came with Angular 6 enable developers to turn their web apps into progressive web apps easily.

You’re thinking of a long-term project which takes months or even years to finish? Then Angular is the right choice for you. Angular helps to build a perfectly scalable app from the start. That’s is why adding new features later will have no problem. As a result, after the MVP launch and getting the first feedbacks from the users, you can easily improve the app by adding new features. So, once your business will scale the app can scale as well.

Angular along with other technologies is great to build a fully cross-platform compatible application. The framework helps you to build robust progressive web apps, desktop-oriented apps (ElectronJs), and native mobile applications (Ionic, NativeScript). Such an approach will save tons of time because the component -based architecture allows building a fully extensible web application and reuses developed components easily.

Finally, if your aim is to develop a robust web app with quick performance, smooth navigation, and fast load time - you should choose Angular. The technology will help you not only to build the desired web app but to have a large impact on the business and community.

Ready To Start Your Project?

There is no such concept as Angular bad practices. The Angular framework is an excellent choice to build a stable app with quick performance and smooth navigation. However, as a product owner, you shouldn’t blindly follow the trends and carefully consider whether this technology is suitable for your project. If none of the mentioned criteria are true to your project, then we highly recommend you to go for Angular web development. You won’t be disappointed.

Drop us a line if you have any questions about Angular development or startup development in general. We gladly help you! 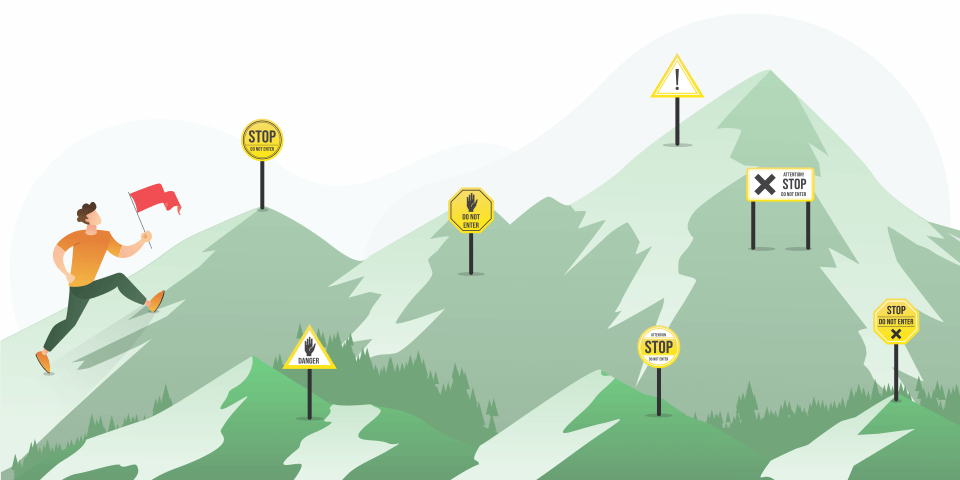 This story is about my experience of how I was working on a dream project. which eventually got postponed to nowhere and what I’ve learned from this.

Software Testing in Startups could be a tricky task. Let's dive into how to choose the best QA strategy for the startup.