Pivoting is a sort of buzzword among startup founders. You don’t have to spend too long at an entrepreneur meetup group before you’re bombarded by people telling you of their plans to “pivot.”

But do you know what it actually means to pivot? More importantly, do you know whether or not you should be pivoting right now? Pivoting now has a variety of definitions because so many people misuse the term. For many entrepreneurs, the concept of pivoting can be scary and confusing.

After all, plenty think that it’s something done out of desperation because things are going horribly wrong with a company—almost like an admission of devastating failure. However, others think that it’s a way to take their startup to the next level. Our aim is to set certain clarity in startup pivoting connotation.

What is Startup Pivoting?

Pivoting is a shift in the business strategy, it is often believed to entail drastically changing the whole company. Pivoting usually happens after given feedback either by the consumer or expert on the product or the currently used strategy.

Pivoting does not mean a fail, it just means changing your idea. Pivoting is usually a part of a startup because during the initial phase without proper guidance there are chances where you might have skipped a specific aspect and after funding either from Angel Investor or Venture Capitalist, you get an insight to do better in a particular area.

Pivoting should feel lightweight. When you're at the earliest stages of your company, especially pre-launch or very near after-launch, changing your ideas constantly is kind of the norm. Frankly, if you're not in a state where you're rapidly changing ideas over and over again in quick succession, you are likely doing it wrong. You are likely moving too slow. So, changing your idea constantly is all about trying to find exactly the right version of your product and idea in general. And it’s something you should be doing in the beginning.

And if we want to be really technical, a true pivot is where existing companies with lots of users decided to shut this thing down and do something different. For example, a real-life example where a startup has to pivot after receiving the funding is Yelp. The initial idea of Yelp was asking for a direct recommendation from a friend who felt flat. Then they experimented with the idea of allowing users to write reviews of local businesses after the constant feedback from the investor and now this has turned the venture into a product where it has become almost impossible to start a local business without eventually building support from the local review sections on Yelp.

Why Should You Pivot?

Because so many companies have pivoted and experienced massive success as a result, it’s easy for founders to believe that pivoting is a magic pill that can cure any problem. In truth, however, pivoting should only be considered when absolutely necessary, and when all other options have been exhausted. To make sure you don’t make a rash decision with your company, below are some good reasons to pivot:

1. Your Company is Always Playing Catch-Up

2. There’s Too Much Competition

Your idea may seem unique and original at first, but there’s always the chance that a bigger company with more resources and funding and a built-in audience will come along and create an offering that’s similar to yours, only better. Since you don’t really have much of a choice in this situation, your startup is probably better off doing something completely different.

3. Your Company Has Hit a Plateau

If you notice slow (or no) progress in your company’s development, then it’s possible it’s hit a plateau. This may be the result of boredom or an unmotivated team, or simply an inefficient strategy, but whatever the cause, a pivot should be considered. It doesn’t need to be a major pivot, but take an honest, objective look at your company and identify something that can be revamped.

4. One Thing Gets the Most Traction

If only one aspect of your company is succeeding and the rest are failing, or, at least, moving slowly, then that may mean that your company should focus on capitalizing on what’s working and change, maybe even radically, or completely ditch what isn’t working. By directing your attention on what works, depending on what strategy you take, your company can experience a boost in productivity, efficiency, and revenue.

5. There’s Limited Response from Your Product

You can do all of the customer development and research in the world, but just because you have someone say that they would pay X amount for your offering now, doesn’t mean they will still buy it, say, six months down the line when you’ve actually built and launched your product or service. A lukewarm response to the first release of an offering doesn’t usually bode well, and while it’s possible to generate buzz with marketing and PR, you can only do so much to convince the world of the value of your product.

6. Your Perspective Has Changed

Once you’ve launched your company and have been running for some time, there’s a possibility that your goals, vision, and values will change. Researching a niche and experiencing it firsthand are completely different from one another, and you may realize that there are other, more lucrative avenues for you to pursue and that your current course just isn’t for you. 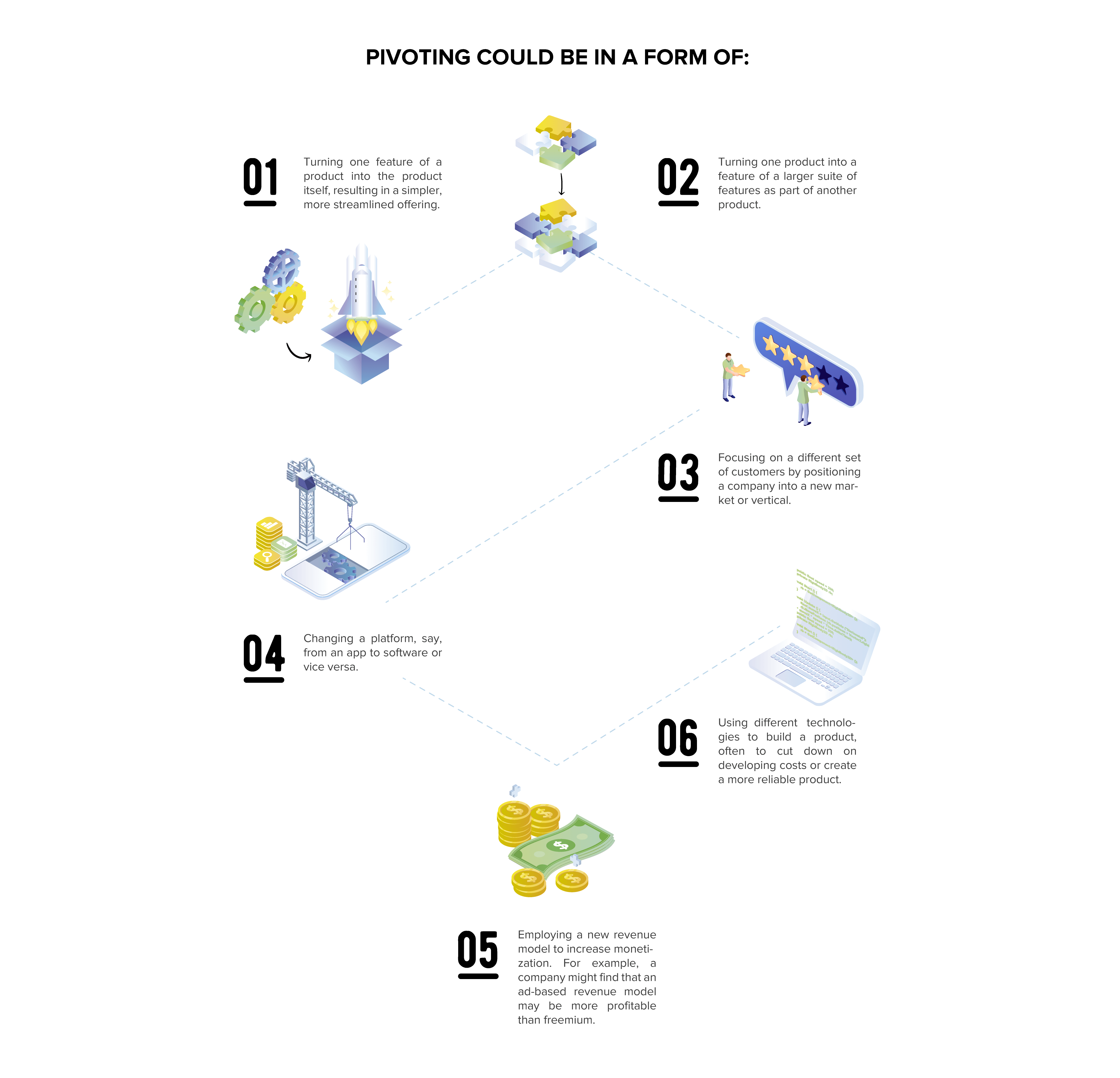 Good reasons to not pivot:

How to Pivot Effectively?

Once you’ve decided to pivot your company, you must take into account the numerous factors that entail a successful pivot. Here are some tips to help ensure that you reduce the risks associated with pivoting and increase your chances of a lucrative outcome:

Many companies pivot more than once, so don’t give up on the startup life if you think you may have to change course a few times to get your company on the right track. However, if you are going to pivot - whether it’s once, twice, or multiple times - you need to do it as early as possible, as this helps avoid wasting time, effort, and money.

2. Pick new goals that align with your vision

Entrepreneurship is hard, and it requires you to be as brutally honest with yourself as possible, as launching and running multiple companies, or even one company, is a years-long endeavor. If the path you’re on now doesn’t feel right to you, you not only need to step back and evaluate your mission in life, but you need to put in extra time to ensure that your new vision is the right one for you.

Because pivots don’t necessarily require a radical change of course in every case, it’s important to identify what aspects of your company can be salvaged, kept, and reused once you’ve settled on the new direction to head in. You’ve already spent so much time, energy, and money on building a sustainable business, that you should be able to redirect your current resources towards your new goal.

4. Listen to your customers

The feedback you receive from customers is a great indicator of whether you should pivot or not. While occasional negative feedback is expected, if you’re constantly getting criticisms like “too expensive”, “not enough features”, “the purchasing process is too complex”, “there are other, better products out there”, or any other feedback along those lines, you might be ready for a pivot of some sort.

5. Make sure your pivot presents opportunities for growth

Yes, pivoting can be a useful decision for a startup that’s encountered a roadblock and can go no further. However, if you pivot your company in a new direction without much thought as to where you’re going next, there’s a strong possibility that you’ll hit yet another roadblock, just under different circumstances. To help prevent this, make sure that you not only consider pivoting from your original path but that you take into account the opportunities for growth and expansion in your new path. If the market is smaller, the customer base is less diverse or has too much competition, then it’s not worth risking starting another company, so keep looking.

In any of those cases, some kind of pivot is a viable option. But be careful — this particular reason for pivoting is the trickiest to navigate. If your business is doing well, it could be risky to make a radical shift. Still, as a business owner, it's up to you to decide how your company operates. Do what you feel is right — whether that be a matter of your vision, morals, finances, or all three.

Pivoting is an understanding of where your business is heading and deciding on a potentially drastic course of action. Pivoting your startup isn't a decision to take lightly. No matter what you choose to do, it's going to take considerable effort on your end. It means being honest with yourself and any employees you might have about how you do business.

Drop us a line if you have any questions about startup pivoting and we'll gladly help you in any inquiry. 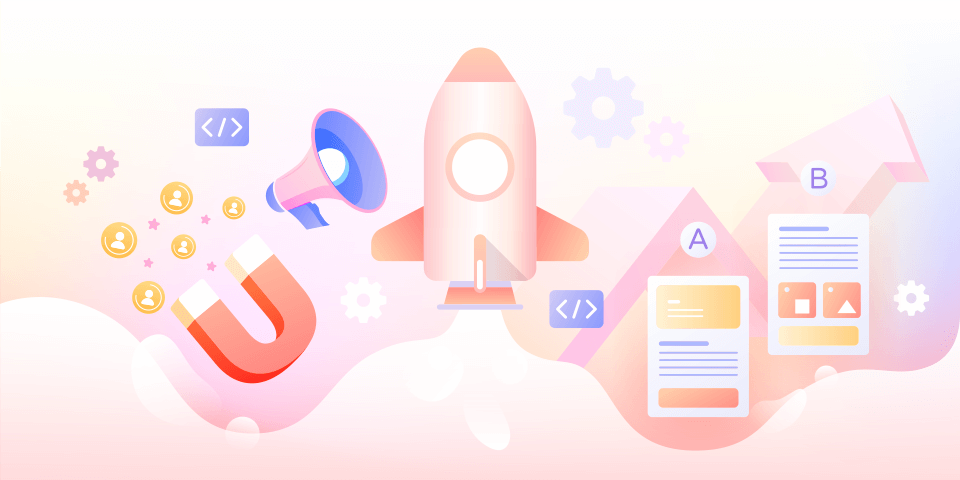 Let’s talk about how to measure product-market fit, how to decide on a growth channel, metrics that lie about PMF, and other mechanics of growth for startups. 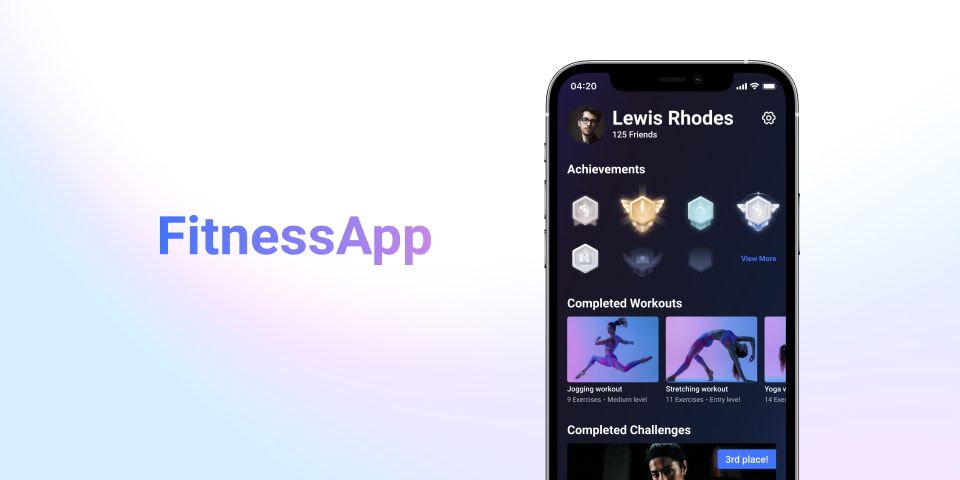 Fitness app development can be quite a challenging task. We'd like to show you UI/UX design of the fitness app that was developed by our team of designers.